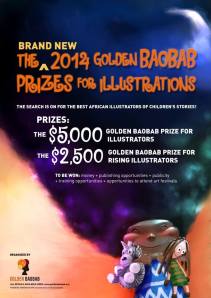 The 2014 Golden Baobab Prizes have been launched and are calling for submissions. This year, Golden Baobab will award 6 prizes worth $20,000. These 6 prizes are:

This year marks the 6th anniversary of the 3 Golden Baobab Prizes for Literature. These prizes invite entries of unpublished stories for children written by African citizens irrespective of age, race, or country of origin.  In November 2013, Golden Baobab launched the fourth and fifth prizes, The Golden Baobab Prizes for Illustrations, to do for African illustrators what the organization has been doing for African writers for the past 5 years: discovering, nurturing and celebrating their talent, passion and contribution to the African children’s literature space. Entrants will submit illustrations as per Golden Baobab specifications.

The newest addition, The Golden Baobab Lifetime Achievement in Children’s Literature Award, which is the 6th prize, has been set up to recognize African writers/illustrators who, during their lifetimes, have made creative contributions of outstanding significance to the development of African children’s literature. At the appropriate time, Golden Baobab will communicate how this prize will be run.

Entry information for the prizes can be found on the organization’s website, www.goldenbaobab.org. Entrants should note that the copyright of each entry submitted to the Golden Baobab Prizes remains vested in them. However, by submitting an entry, entrants declare that they are legally entitled to do so and give Golden Baobab permission to make their entry available for exclusive worldwide royalty-free usage, reproduction and distribution. The deadline for the 2014 prizes is June 29th. Winners will be announced in November 2014.

For information on how to enter the 2014 Golden Baobab Prizes, visit Golden Baobab’s website or contact the coordinator, Nanama B. Acheampong at info@goldenbaobab.org.